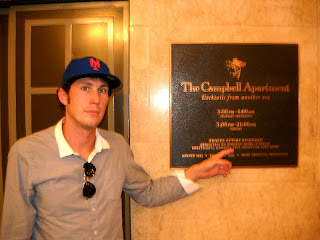 My son and I did some bar hopping while I was in NYC for the National Lipid Association meeting.  This bar is tucked away in the Grand Central Station.  This was the Campbell apartment renovated into a bar.  I strongly recommend it.
Posted by Brian Scott Edwards MD at 5:04 PM 1 comment: 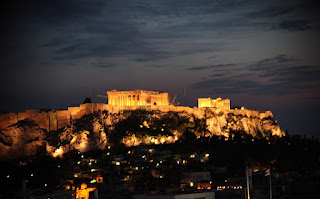 This is the few from the restaurant on the top of the Grand Bretagne.
Posted by Brian Scott Edwards MD at 4:57 PM No comments: 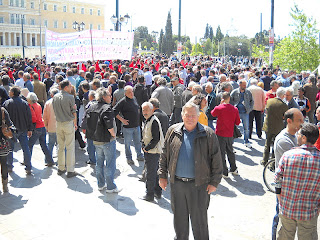 There was a general strike outside of the Grand Bretagne Hotel in Athens.  The first few marches were peaceful.  Later we spelled teargas from our room.
In Ireland there was a change of gov't due to the budget crisis.
In Burma there was a change from military to civilian gov't.
In both places the places the people had no idea what was going on.
In the middle east there was Arab Spring and we had our Cairo visit cancelled.
In Japan we switched our airplane landing from Tokyo to Hong Kong because of the nuclear meltdown.
While we were in the Persian sea, Osama Bin Ladin's body was buried in that sea.
Our trips have crossed paths with many interesting events.
Posted by Brian Scott Edwards MD at 4:47 PM No comments: 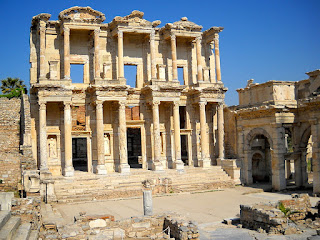 Some of the best ancient ruins I have seen.  Very popular cruise stop.
Posted by Brian Scott Edwards MD at 10:03 AM No comments: 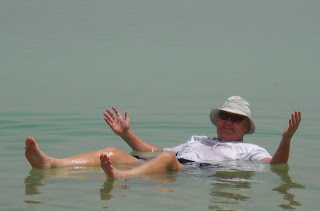 As travel experiences go, this one was a lot of fun.  It is a unique experience to float in the dead sea.  The other people from the cruise were positively giddy.
Posted by Brian Scott Edwards MD at 5:55 AM No comments: 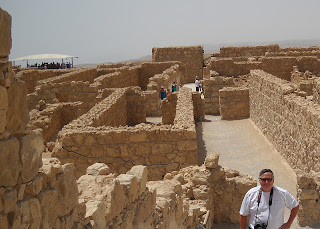 On top of the fortress.  If you are fit and have the time, walk down from the top.
Posted by Brian Scott Edwards MD at 5:52 AM No comments: 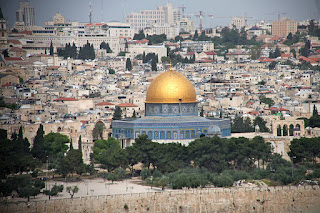 I had been somewhat supportive of the Palestinians when I came to Israel.
The visit to Israel  and other Arab Nations changed my opinion.
I still feel Iran should be allowed to have an atom bomb as Israel probably has about 200.
On the tour I was told that Saudi Arabia has missiles from China and they are pointed at Iran, not Israel.  Since the Saudi's paid for the Pakistan nuclear weapon program, the Saudi's  probably own a atom bomb that is stored somewhere nearby.
I am against preemptive strikes by America.
Deterrence held back Stalin and Mao.  Whoever uses the atom bomb first or a terrorist dirty bomb will have hell to pay.  I know those views are not widely shared.  I had read the book, the Israeli Lobby and strongly advise people to read it.  I believe it gives a fair analysis of the Israeli situation.
However, it is clear to me the Israeli's are kept to a higher standard than the Arab states.
Black September was when the King of Jordan kicked the Palestinian refugees out of his country.
The West Bank of Palestine is a stones throw from Jerusalem.
I was on the old road called Carda, with a group of Israeli school children.  I didn't see the usual armed soldiers to protect them when they go on an outing.  I found out there was one parent to every five children.  Each of the parents was armed with a gun to protect the children if there was a terrorist attack.  If this situation existed in America, there would be no West Bank of Palestine.
We need to let the Israeli's do what they need to do and we need to not interfere with the affairs of the Middle East.   We can't afford these wars anymore.


Posted by Brian Scott Edwards MD at 4:55 AM No comments: 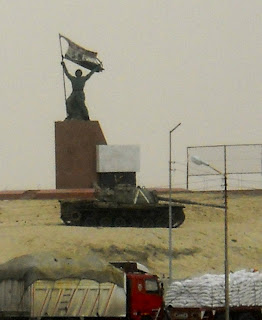 There is a monument, in the shape of an AK-47 muzzle and bayonet, on the eastern shore of the Suez Canal, near Ismailia, Egypt. The monument commorates the Egyptians killed in the 1973 Yom Kippur War with Israel. Ironically, the Egyptians refer to the monument as the 1973 Victory monument.  I missed the monument and that history lesson.
Posted by Brian Scott Edwards MD at 2:43 PM No comments:

Great Snorkeling at Sharm El Sheikh. Watch out for the sharks. 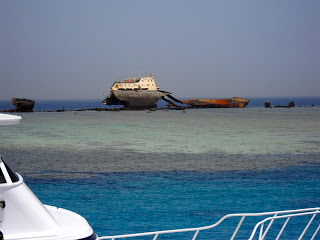 I snorkeled here.  After Bora Bora, it was the best coral I have ever seen.  The bright sunshine helps.

We were cancelled out of Cairo due to Arab Spring.  The headline below fills out the picture.

Posted by Brian Scott Edwards MD at 4:30 PM No comments:

Valley of the Kings Tombs, Egypt 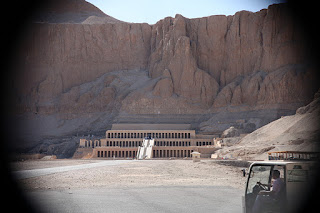 
"This is Deir el-Bahri (Arabic الدير البحري ad-dayr al-baḥrī), and it's exactly where terrorists from the Islamic Group and Jihad Talaat al-Fath ("Holy War of the Vanguard of the Conquest") massacred 62 people in 1997. Since then, Egypt's tourism industry went drastically down, until this day.
When entering the site, it is hard not to think of this story and and focus on the historic value of the site, as the mortuary temple of Mentuhotep II."

Our guide told us that there was only one guard for this site when the massacre occurred.  President Mubarak flew down to the site and was filmed kicking his Interior Minister for letting this happen.

Posted by Brian Scott Edwards MD at 4:01 PM No comments:

Luxor Temple of Thebes in Egypt 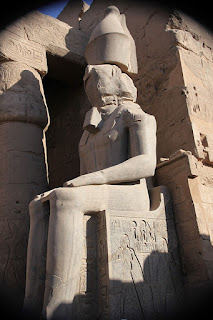 This is a place that several days of study could be spent on.  The frescos across the river in the tombs really impressed me.  People who stayed for the night show,  loved it.
Posted by Brian Scott Edwards MD at 1:52 PM No comments: