Who has healthiest hearts in the World?

Who has healthiest hearts in the world?
Tsimane tribe
Very interesting but there is still some heart disease in the tribe. 25% in elderly.  Thus is this age, inflammation (age) or genetics with high cholesterol?
There are silver bullets for early atherosclerosis and the sooner it is treated with multiple drugs the less chance of a cardiac event.

One thing is clear, the lower the LDLc or LDLp or apoB the less cardiac events occur.
I think the drug company paid a billion dollars on PCSK9 trial.

"At a time when the target for low-density lipoprotein (LDL) cholesterol, more commonly called 'bad cholesterol', in Americans' blood is less than 100 milligrams per decilitre (a level many people fail to achieve), Tracy's level is just 14."

3-IMPROVE IT trial for Zetia 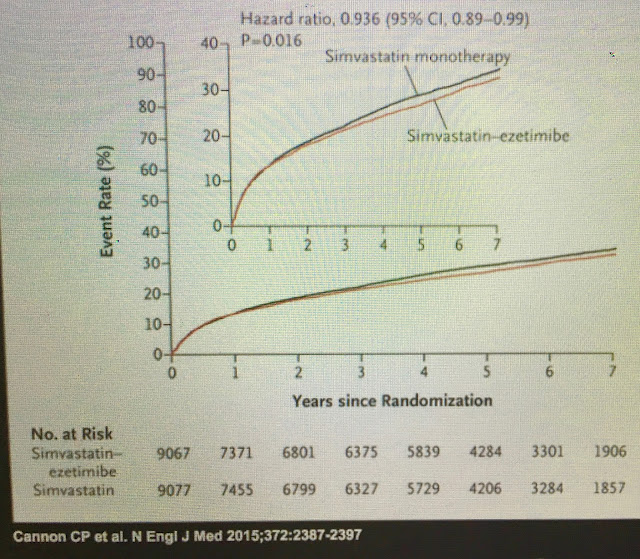 This chart above shows it took 7 years to get a good result with Zetia combo.
The Niacin  combo trial was stopped after 3 years AIM HIGH TRIAL. 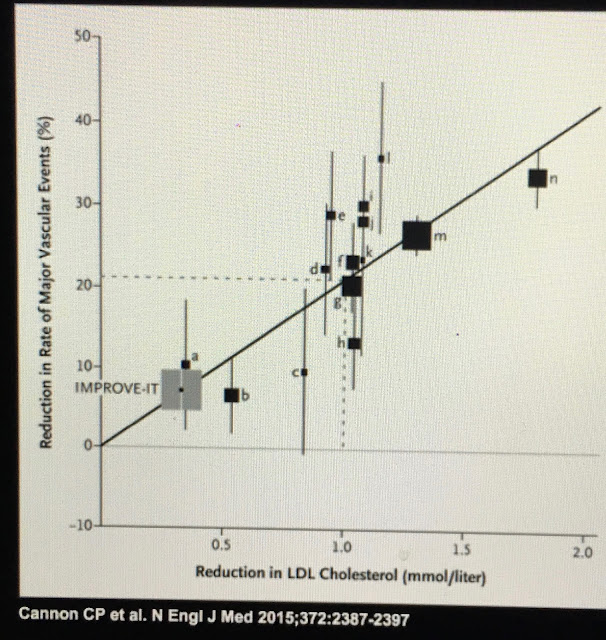 This chart shows results of many trials lowering LDLc. The lower the result the better the outcome.

4-Niacin combo trial only done for 3 years
AIM HIGH trial stopped after only 3 years.  If AIM HIGH  was allowed to go on for 7 years as above IMPROVE trial did, I suspect AIM HIGH would have had similar good results .
LDLc went below 65 on combo Rx. 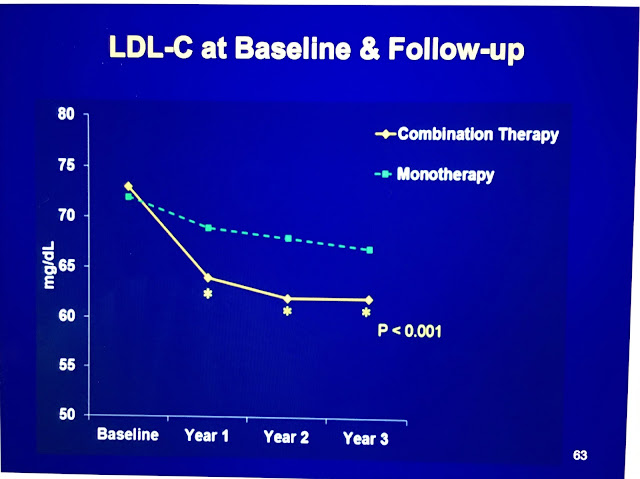 ​This is Terry Jacobson's slide at the Master NLA program last year.
It is a shame this trial was stopped early due to side-effects that later turned out to be insignificant.

While reports of Egyptian mummies and Amazon tribe and elderly Japanese women are interesting they are not hard science.
Posted by Brian Scott Edwards MD at 11:24 AM No comments:

Rand Paul tries to get into secret meeting on Repealing ACA

This history shows why GOP not likely to Repeal and Replace Obamacare.   It was extremely difficult for Obama to pass it.


The incident today with Rand Paul in the basement of Congress not allowed in a secret meeting on ACA reminds me the secrets meetings reported in the link.  Watching how sausage is made is not for the squeamish.


20 page report on How Obama passed ACA.
link above


‘After looking at this old transcript,  I don’t think GOP has much of a chance to Repeal or Reform Obamacare.
Repeal and Replace Obamacare is the most important issue facing the USA.   Unfortunately the Media discusses what they think will raise ratings as being the most sensational news.
As I read this transcript I was amazed how similar Obama"s and Trump’s effort
to make the

I think Obama got his bill passed as the media did not focus on the secret
meetings, as they will with Trump.


I high lighed much of the transcript so readers can skim through the 20 pages quickly.
Posted by Brian Scott Edwards MD at 4:06 PM No comments: