People they don't believe I have Alzheimer's disease.

Update on the progress of my Alzheimers link

I can see my slow deterioration in mentation.

The great thing is I had no idea I would be so good two and one half years after my diagnosis was made.

Take heart fellow AZ patients, you still have a good life ahead of you.

As the saying goes"

Don't let perfection be the enemy of the good.

Now there is a skin test to determine if you have Alzheimers which might make early diagnosis possible.
Posted by Brian Scott Edwards MD at 10:48 AM No comments:

This is why I ran from Florida

I wanted to leave Florida in March because I knew Florida would become a hot spot.

I think I am in a safer state.

We continue with lock down at home.

We pick up 7 wine bottles on sale which they bring out to the car $12 a bottle.

I have my big Samsung TV.
I have my large dog NEWFOUNLAND BREED.

We struggle to keep up with our physican appointments.

However in Topeka we can do video appointments.

We don't have the beach but we had to get out of Florida before hurricane season.

LIFE IS A BEACH (Bitch) LINK

We are happy in shut down in Topeka.
We don't miss Florida.


Posted by Brian Scott Edwards MD at 8:45 PM No comments:

Reading Astrophysics for People in a Hurry

Reading Astrophysics for People in a Hurry

he has also written for an Alzheimers patient.

Most people are familiar with what the Greeks taught us:

In his first chapter Dr. DeGrasse tells us the rest of the story.

Chapter One: The Greatest Story Even Told

In the first chapter its all about:

At the beginning the three components of the Universe were present,
"in a volume less than one-trillionth the size of the period that ends this sentence."

"The Universe was so HOT the basic forces of the Universe
that collectively describe the universe were unified."

This small volume could only expand causing the Big Bang.

What would the Ancient Greek philosophers thought of this science?
Leucippus and Democritus would have been receptive.

What does the modern American think of this science?

I have always loved physics.

As an Alzheimers patient my math skills are gone but DeGrasse
brings this information to me in way I can understand
and enjoy with wondrous amazement.

Einstein tells us about "gravity which in the presence of
energy and matter
curves the fabric of space and time."

DeGrasse says we are still trying to figure out a unified concept of the two.

However in the present,
Astrophysicists apply both concepts with no problem.


"The universe was hot enough for these photons to spontaneously convert their energy into matter-antimatter particle pairs which immediately thereafter annihilate, returning their energy back to photons.Yes antimatter is real."

"The universe was a seething soup of
quarks
leptons and their antimatter siblings along with
bosons."

"The ordinary photon is a member of the boson family'

Leptons are the electrons and maybe the neutrino.

"there are no familiar quarks...quarks have fractional charges that come in thirds"

As the cosmos continued to cool and expand...the temperature dropped rapidly below a trillion degrees Kelvin"

No longer "hot enough or dense enough to cook quarks"

A "new family of heavy particles was created called hadrons"

"This transition soon resulted in the emergence of protons and neutrons."

"By now one second of time has passed"

since the Big Bang.

I think I will leave it there for now as I am getting tired and I don't want to make mistakes.

Posted by Brian Scott Edwards MD at 10:18 AM No comments:

In my Episcopal Men's Group this morning we were talking about how importance forgiveness is for the world.

I shared my personal experience with having increased flare of anger with my Alzheimers.

Through life I always internalized feelings from bad (and good)  experiences to process my feelings in a rational method.  My therapist said I intellectualized them?

Now with my wife I am ashamed to say, I let her push my button simply by looking after me.
All that fussing accelerates my angry to a bad level and often she is tired and just addressing issues  that she believes are important.

Anger is a problem with Alzheimers.
I am still learning about it.
After my concussion I was more depressed and that was a problem for my anger control.
Frustration and Stress will bring anger out as well.
I try not to talk  to business people on the phone because they don't answer my question and go on a tangent.
I then speak louder and repeat my question.

I am doing much better now.
I try to be mindful to just accept her suggestions.
She is trying is disengage when she sees I am getting upset and louder.

In the group a man over 80 had a similar experience with a manager he knows well.
He wanted a refund for the month of gym membership, when the gym was closed during the COVID lockdown.
The manager asked why he was getting so loud after the manager said there was no refund.
The octogenarian didn't realize he appeared anger or was raising his voice.
He was chagrined as that is now how he acts in private or public.
He asked me if he had Alzheimers.
I said no.
I said you are just a grumpy old man.

Truth is who knows?
Should he bother with serial cognitive testing at his age?
His choice.

I suspect he has the memory loss associated with aging.

Something new that I have not done.

I will try to find out if anyone in Kansas does the test.

Posted by Brian Scott Edwards MD at 9:20 AM 1 comment:

Berkeley was born in 1685 near Kilkenny, Ireland and
he is the first to imagine a Matrix movie reality. 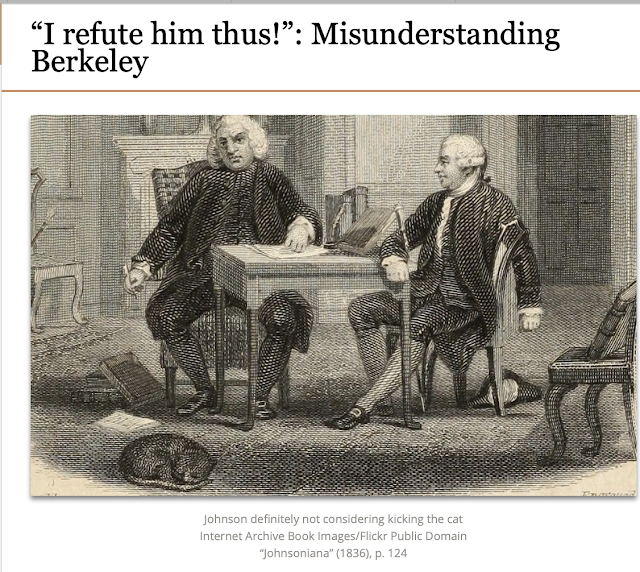 Above Ben Johnson about to kick a cat to refute Charles Berkeley theory of the Matrix universe. 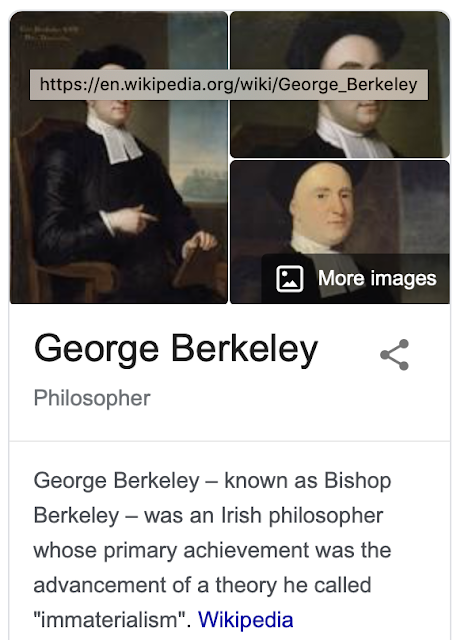 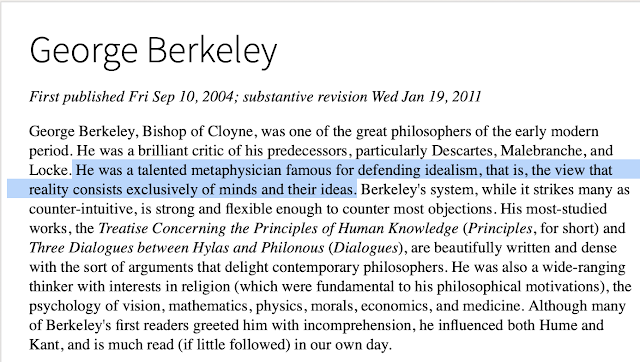 My Episcopal Men's group is reading:

A Pilgrimage To Eternity
From Canterbury to Rome in search of a faith.

We reviewed chapters 30 and 31 this morning on Zoom.

p292
"At the cathedral of Santa Margherita...there is a crypt of
Saint Lucia Filipini"

She died in 1732.
Her body has not decayed.
She was pronounced:
"incorruptible"

The author Tim Eagan said there are 300 reliquaries in Europe.

On his Via Francigena Pilgrimage he had seen many of these glass coffins in church with bodies of Saints.
He was never impressed.
However now near the end of his journey he is astonished by the preservation of this 300 plus year old body.
He starts taking photos of the eye as it blinks at him.
Later when he visits again with his wife the body is not blinking.
He said he has photos.
She says I will believe you if you want me to.

What is happening here?
We discuss in the Men's group.
We are Episcopalians and we considered ourselves rational and science based.

We have discussed the reality of miracles many times.
Some in the group don't believe in the Trinity.
If Jesus is God why does he have to pray to himself.
I argue you lack imagination.

I continue my usual rant that I am a science fiction fan.
I also have studied quantum theory.
I was surprised to find out that outer space is not just a vacuum.
Outer space in filled with energy particles.

Science can quantify energy but they they really don't know what it is.

Foundation of science is not ironclad just because the math formulas are so impressive.

I told the group I always tried to explain what "truth" is to my prior wives as I was trying to get out of something I had done.
They know I am a Brooklyn wise guy and laugh.

I talked about Charles Berkeley mentioned above.  My friends are mostly engineers and never heard of him.
I learned about him in Philosophy 101 at Brooklyn College.  A free city college.

Berkeley claimed the physical reality that you believe to be true based on your five senses is not the ultimate reality.

"I refute him thus" link

Clearly we now know that
Berkeley's God is the giant computer complex shown in the movie series The Matrix.

I am trying to take the Blue pill as I try to build my faith in God.

However I am a de facto  Red pill taker due to my scientific background.

To take Berkeley's side I suggest a Purple pill.

The ultimate truth is your feelings.

No one can prove your feelings are not real.

They are your personal experience.
No one can argue about the fact you are experiencing them.

The group then talks about personal religious experiences.

I am talking about the feeling of love.


Posted by Brian Scott Edwards MD at 8:04 AM No comments:

My financial advisor invested $4,000 into index funds when
I thought the markets were as low as they were going to be.

I write this again to show how Alzheimers is not so bad in the first 2.5 years for me.

Despite having AZ I called the stock market  link

Check out these predictions and make your own:


Posted by Brian Scott Edwards MD at 11:10 AM No comments:

This is letter to our financial advisors.

1. How much did I invest when the market was low?

2. How much gain did I make on those investments?

3.I regret not buying oil when it was below zero.
Would that had been possible?

4. Did we only buy index funds or were there individual stocks included in the buys?

5. With reopening this weekend I think there will be a surge of deaths and
eventual dip in the market ahead of us.
Do you have a plan ready for when the market hits bottom again?

6. Do I have any bonds maturing within the next six months?

7. Are there any stocks that might go bankrupt.  Should we sell them off now?

8. What are our 5 strongest stocks right now?

9. Are there any stocks that are higher than before the crash?

My wife thanked me for the help in making the questions.

This is why I am no longer waiting till I forget I have Alzheimers.

It doesn't matter since I can still mentally function at a high level in certain areas.
Certainly not math however.

This is why I write this blog.
To give people diagnosed with Alzheimers hope.
I was diagnosed in Dec. 2017

Posted by Brian Scott Edwards MD at 8:37 AM No comments: