List of 20 who met Weight Loss Challenge on LCHF

There are 19 people on the list.
I just added the 20th name.  He just crossed the 5 year point: 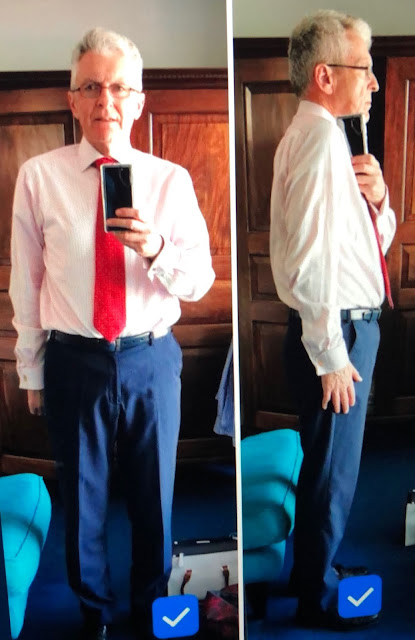 I have not yet added several from South Africa. 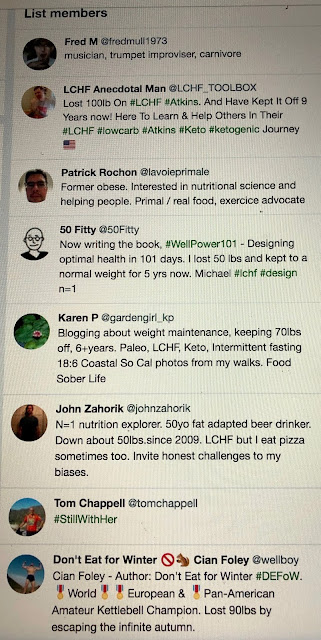 Shoot out at the OK Coral in Dodge, Kansas (this time not in Arizona) 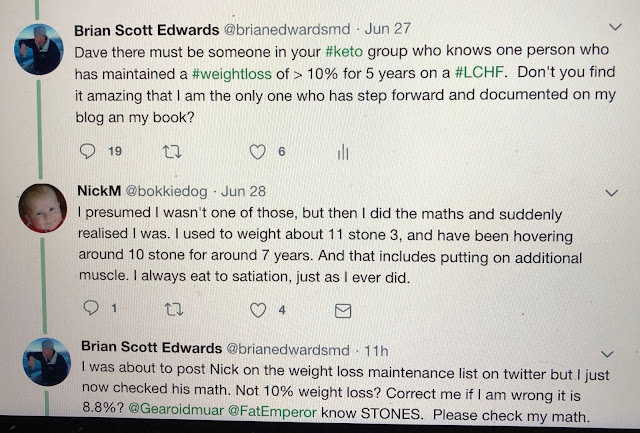 Gunfight at the O.K. Corral

Internet is now the Wild West with weaponized tweets 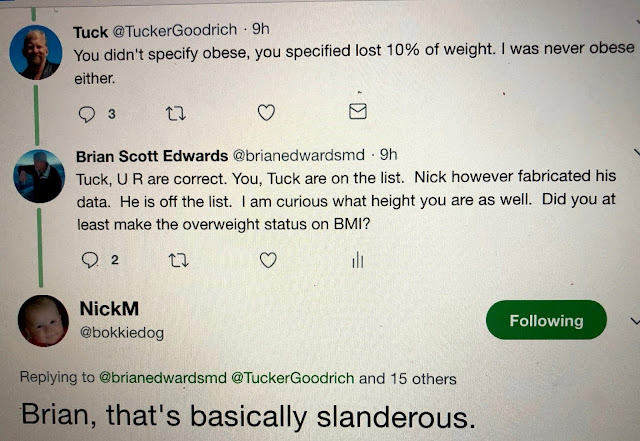 Posted by Brian Scott Edwards MD at 2:58 PM No comments:

What caused the obesity epidemic? No one knows

Thanks to Nigel for showing me this article.  He put this on twitter

"I agree that long-term weight loss maintenance is hard. What do you think of https://onlinelibrary.wiley.com/doi/full/10.1002/oby.22073 … ?" or read my edited version below.


My comments in purple

Several putative explanations of the obesity epidemic
relate to the changing food environment.
Individual dietary macronutrients have each been theorized
to be the prime culprit for population obesity,
but these explanations are unlikely.
Rather, obesity probably resulted from changes in the
caloric quantity and quality of the food supply
in concert with an industrialized food system that produced
and marketed convenient, highly processed foods
from cheap agricultural inputs.
Right at the start.  This is a possibility.
However, no one knows, what caused the epidemic.
I know what would reverse the epidemic. World wide famine.
I think an infectious cause from bacteria in the gut is just as likely.
Such foods often contain high amounts of salt, sugar, fat, and
flavor additives and are engineered to have
supernormal appetitive properties driving increased consumption.
And yet many people are lean?
Not as addictive as nicotine or opioids.
Ubiquitous access to convenient and inexpensive food
also changed normative eating behavior,
with more people snacking, eating in restaurants,
and spending less time preparing meals at home.
While such changes in the food environment provide
a likely explanation of the obesity epidemic,
definitive scientific demonstration is hindered
by the difficulty in experimentally isolating and
manipulating important variables at the population level.

Body size is highly heritable, and
genetics plays a substantial role in determining individual obesity susceptibility.
However, our genes have not changed appreciably over the past several decades,
implying that environmental changes must have caused the current obesity epidemic.
Here, I describe putative explanations of obesity
that focus on aspects of the food environment,
including dietary macronutrient composition, energy content,
and the overall quality of the food supply.

Is it the Protein?

Figure 1
(A) Macronutrient proportions of the US food supply as determined by the Food and Agriculture Organization of the United Nations (FAO) food balance sheets (http://www.fao.org/faostat/en/#data/FBS). (B) Total per capita energy content and contributions of carbohydrate, fat, and protein in the US food supply as determined by the FAO. (C) Incremental increases in food energy supply since 1973 calculated by using data from the FAO, United States Department of Agriculture (USDA) food availability (https://www.ers.usda.gov/data-products/food-availability-per-capita-data-system/food-availability-documentation/), and USDA loss‐adjusted food availability (https://www.ers.usda.gov/data-products/food-availability-per-capita-data-system/loss-adjusted-food-availability-documentation/) far exceed the calculated energy intake changes corresponding to the US population weight gain 12.

Is it the Fat?

The dietary fat model of obesity postulates that increased fat consumption
leads to increased overall energy intake.
Compared with carbohydrates and proteins
that have less than half the calories per gram
and are typically associated with water in food,
fat has a high energy density, is less satiating,
and results in a smaller postprandial increment in energy expenditure 5, 6.
Covert experimental increases in dietary fat result in
1- higher ad libitum energy intake,
2-positive energy balance, and the
3- accumulation of body fat 5, 6.
Dietary fat does not substantially promote its own oxidation.
Therefore, increasing fat intake results in the efficient accumulation of body fat,
which is relatively unopposed until adipose tissue sufficiently expands
such that daily lipolysis increases
to elevate circulating fatty acids and balance fat oxidation with fat intake 7.
Interesting statement. Not sure I understand what it means
in terms of resetting a person’s “normal” weight range
and subsequent plateau with weight loss.
Decreasing the fat content of meals leads to lower ad libitum energy intake,
I question if this is a true fact.
and experimental overfeeding of dietary fat results
in greater increases in body fat
compared with isocaloric carbohydrate overfeeding 5, 6.
Don’t think this is true comparing Atkins with Low fat diets.
See 2 slides below from one trial.

Furthermore, dietary fat in the food supply has increased in absolute terms
during the development of the obesity epidemic (Figure 1B).
Even more than the increase in CHO’s?
While these experimental observations favor the dietary fat model,
ubiquitous advice to follow lower‐fat diets
during the 1980s and 1990s did not
appear to slow the progress of the US obesity epidemic.
Furthermore, prescribing low‐fat diets does not lead to greater weight loss
when compared with other diets 8.

Is it the Carbohydrates?

The “carbohydrate‐insulin model” of obesity
posits that dietary carbohydrates are particularly fattening
because of their propensity to elevate insulin secretion
and thereby direct fat toward storage in adipose tissue
and away from oxidation by metabolically active tissues.
These changes in energy partitioning have been postulated
to decrease energy expenditure and increase hunger,
leading to the development of obesity 9.
However, experimental tests of the carbohydrate‐insulin model
using isocaloric diets widely varying in carbohydrates and fat
fail to support key model predictions regarding changes in energy expenditure and body fat
9,  Hall KD.
A review of the carbohydrate‐insulin model of obesity.
Eur J Clin Nutr 2017;71:323‐326.
10. Hall KD, Guo J.
Obesity energetics: body weight regulation and the effects of diet composition.
Gastroenterology 2017;152:1718‐1727.e3.
I need to read the articles above.
Nevertheless, it is possible that the increased carbohydrates in the food supply (Figure 1B), particularly refined carbohydrates, contributed to the obesity epidemic by augmenting overall calorie intake.

Is it the Calories?

Experimental studies in humans demonstrate that
increasing the overall amount of food available for consumption
leads to increased ad libitum energy intake 11.
For some lean individuals it is very difficult to gain weight. Simms and Hirsch research.
Their insulin/leptin brain control over weight gain works. Leibel and Rosenbaum
Over the past several decades, per capita US food availability
increased by about two to three times more
than is required to fully explain the observed population weight gain
(Figure 1C), with the surplus food resulting in
a progressive ∼50% increase in per capita food waste 12.
Globally, the increase in per capita food energy availability
is positively correlated with increased weight gain across nations,
and the magnitude of the increase is more than sufficient
to account for the observed weight gain in 80% of nations 13.
Thus, increased energy availability in the food supply
is likely an important driver of the obesity epidemic.
However, in Lean individuals the insulin/leptin action in the brain prevents overeating
for everyone with normal brains.
They suppress Ghrelin (hunger) hormone.

Is it the Food Quality?

Focusing solely on the increased calories in the food supply masks the complexity
of the simultaneous changes that occurred in the food system
during the rise in population obesity prevalence 14.
The increased food energy availability was driven by economic
and policy influences to maximize the agricultural production
of cheap inputs (e.g., corn, soy) to an increasingly industrialized food system
that produced and intensively marketed
inexpensive, convenient, highly processed, “added value” foods.
Such foods contain relatively high amounts of salt, sugar, fat, and flavor additives
and are engineered to have supernormal appetitive properties,
thereby driving increased consumption 15.
Ubiquitous and continuous access to food also influenced normative eating behaviors
such that more people
1- snack between meals,
2-eat in restaurants, and
3- spend less time preparing meals at home 15.
These factors likely increased calorie intake and thereby caused obesity.
Again no discussion of insulin and leptin to prevent overeating. Many lean people remain.

It is difficult to imagine a definitive scientific demonstration of the cause
of the obesity epidemic because population environmental changes are difficult
to isolate and experimentally manipulate.
It is easier (?) to rule out simple explanations of obesity,
such as those based on individual dietary macronutrients.
Well I think sugar and CHO are main culprits for
“engineered to have supernormal appetitive properties, thereby driving increased consumption”
especially in kids.
More plausible explanations invoke complex changes in the overall food environment
and the associated alterations in normative eating behaviors.
Furthermore, a confluence of multiple interrelated environmental changes
apart from the food environment,
such as decreased occupational physical activity,
likely played important moderating roles in the development of the obesity epidemic.
Believe there are many office workers who remain lean
because their insulin/leptin controls work
Disentangling the relative contributions of these environmental variables is a difficult problem,
but it seems clear that the food environment is likely the primary driver of the obesity epidemic.
I am all in favor of monitoring pregnant women to prevent too much weight gain.
I am all in favor of teaching kids to drink whole milk instead of fruit juices.
Have kids eat protein every breakfast, lunch and dinner and snacks, no cereal.
Then if kids or teenagers gain weight,
pediatricians must check insulin level with glucose level
as per Eat Rich Live Long by Cummings Dr. Jeffrey G.
If kids have pre-diabetes or high insulin because they are insulin resistant,
then LCHF or Atkins is required.
This may not solve the obesity epidemic
but it may allow the insulin/leptin brain controls to prevent weight gain to work.
Kids will know they are full.
Posted by Brian Scott Edwards MD at 1:01 PM No comments: