The Sponge Syndrome is the perfect storm for weight regain in the reduced obese.


I believe I have unified the concept of the Sponge syndrome with the reset Leptin threshold and the insulin resistance of the reduced obese to maintain weight loss maintenance.


I asked Dr. Leibel if adipocytes only life 10 years.  He said there is some discussion of that but there is evidence that the fat cells that die are rapidly replaced. Thus the 200 million excess fat cells of the obese are still there for life in the reduce obese waiting to be a sponge for free fatty acids.


I had the privilege today of listening to Dr. Michael Rosenbaum talk about why weight loss maintenance is so difficult.I asked Dr. Rosenbaum if what I call the Sponge Syndrome might also make it difficult to maintain weight loss.  Small fat cells are efficient at re-gaining fat. Since the reduced obese continued to have a large number of fat cells despite weight loss all these cells make it easy to gain weight.  He asked why the skinny people with skinny fat cells don’t also regain weight.  I said the they don't have low leptin levels that are reset to be higher if they were never BMI over 30.
I also heard Dr. R Liebel state that Leptin is the critical hormone in obesity.


From 2001 textbook, Endocrinology:An Integrated Approach to Endocrinology “The overall action of Insulin on the adipocyte is to stimulate fat storage and inhibit mobilization.’

Taubes goes on to say:


“With that physiologic fact as a given, any explanation for obesity or the obesity epidemic that looks beyond the influence of carbohydrates on insulin is one that is willfully trying to complicate an explanation when a simple one might suffice.”


“Insulin is the most important hormone coordinating the use of fuels by tissues.  It’s metabolic effects are anabolic, favoring, for example, synthesis of:
1-glycogen
2-triacylglycerols (TAGs) {also known as triglycerides}
3-protein


p 311
“Adipose tissue responds rapidly to a rise in insulin, which causes a significant reduction in the release of fatty acids by inhibiting the the activity of hormone-sensitive lipase, which degrades lipids in adipose tissue.”


“Insulin also increases the transport and metabolism of glucose into adipocytes, providing the glycerol 3-phosphate substrate for TAG (triglyceride) synthesis.”


p 326
“in the fed state, elevated levels of glucose and insulin favor storage of TAG (triglycerides)”


In metabolic syndrome, there is an elevated level of insulin as the beta cells try to keep homeostasis of glucose level in the face of insulin resistance.
The high levels of insulin make the dyslipidemia of metabolic syndrome.  This is why in the Sponge syndrome insulin and leptin are major players for causing the 300 million starved skinny adipocytes of the reduced obese so easily take on FFA.

In a slide today at the Columbia Obesity Board review in NYC, Dr. Rosenbaum put up this slide: 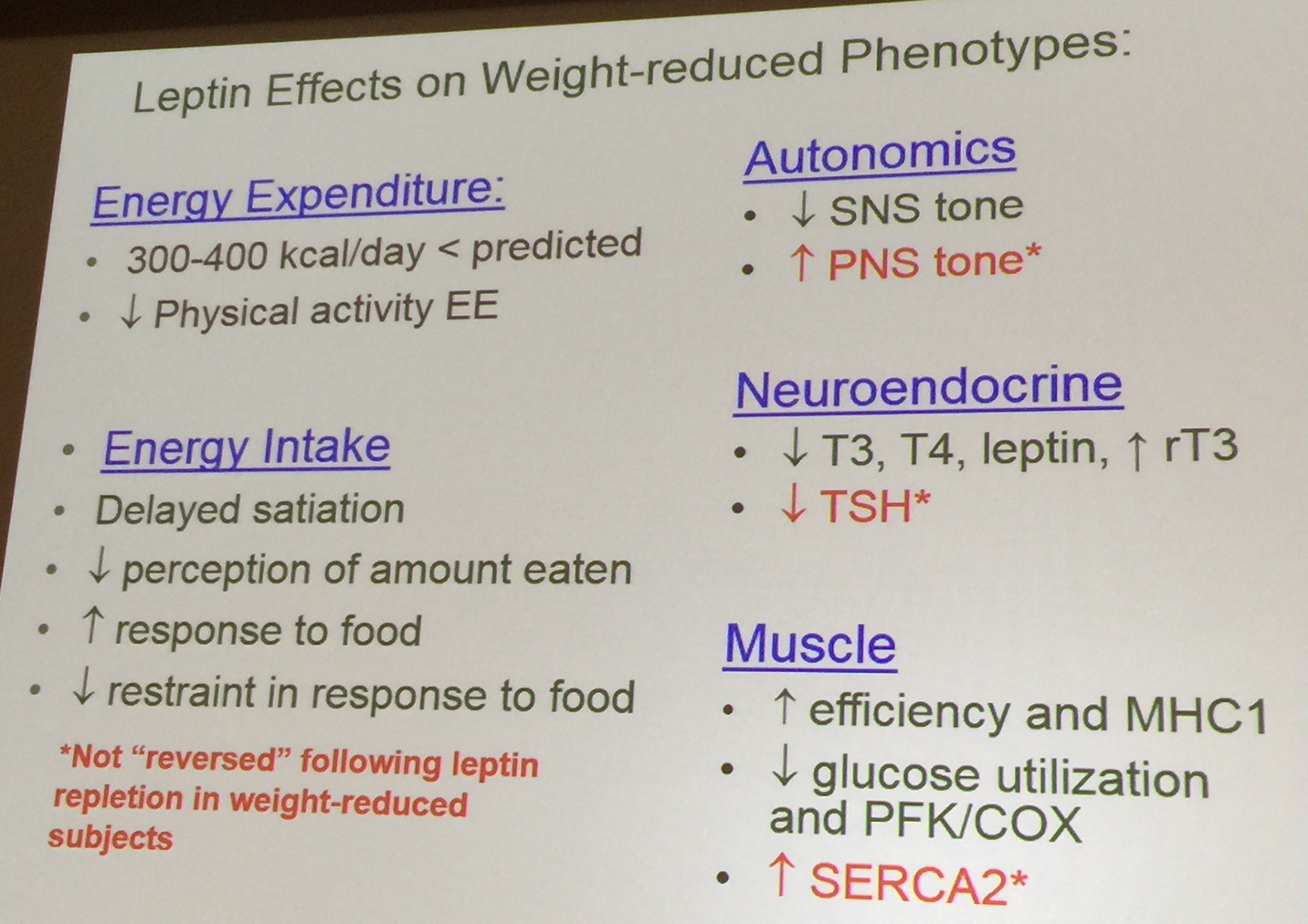 It’s not clear to me how Liedel and Rosenbaum don’t seem to accept the unifying concept of the  two strongest obesity peptides to prime the excess adipocytes of the reduced obese causing weight gain as I put forward the Sponge syndrome.